Ozone in the Dental Surgery 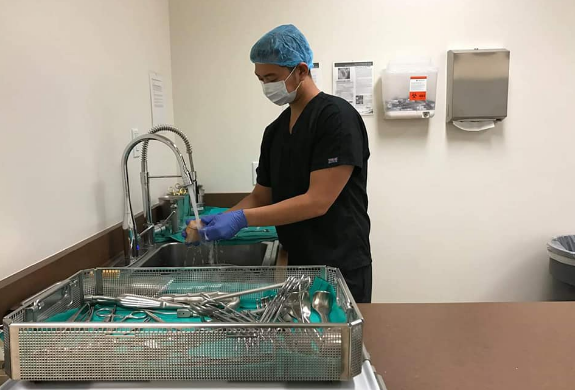 Ozonated water in the Dental Surgery

Topical use of ozonated water in dentistry leverages the antimicrobial and immune stimulating properties of Ozone. Ozonated water has been suggested as an alternative pre-procedural rinse to existing agents such as chlorhexidine and essential oils. Ozone in water can kill bacteria and other pathogenic microorganisms by rapidly rupturing their cell membranes (within several seconds). The same effects occur when dental plaque is exposed to ozonated water as a rinse. Ozonated water has no side-effects such as unpleasant taste or tooth staining, which are characteristic of other biocides or disinfecting agents.

Ozonated water can also be used as a sterile irrigation solution for surgery (as it enhances haemostasis), or as an antimicrobial mouth rinse following tooth extraction. Of interest, ozonated water when used as a daily mouth rinse has been reported to accelerate healing of oral mucosal wounds, particularly when used over the first 48 hours after surgery.

The same benefits of accelerated wound closure may be seen when used in patients with oral ulcerations from chemotherapy. The greater speed of wound closure can be explained by the known positive effects of topical Ozone on enhancing local microcirculation. Known positive biological effects of Ozone include improved oxygenation of tissues, greater cell motility and accelerating of immune responses to bacteria. Accompanying these effects is an enhancement of natural antioxidant defense systems.

Ozone is known to stimulate the production of several key cytokines, including interleukins 2, 6, and 8, and transforming growth factor-beta, and to attenuate the inflammation driven by bacterial lipopolysaccharides. Recent studies have shown that ozonated water as a mouth rinse can reduce gingivitis in orthodontic patients. As a topical agent, the use of ozonated water has an excellent safety profile as Ozone dissipates quickly as it is converted back to diatomic oxygen. Its use is well established in 16 countries, and there is an extensive supporting literature from the work of Bocci, Filippi and other investigators.

In February 2011, an otherwise healthy 82-year-old woman was admitted to hospital with fever and breathing difficulties. Chest x-rays showed several areas of consolidation indicative of pneumonia.

Legionnaire’s disease was diagnosed by a Legionnella urinary antigen test. Despite antibiotic therapy, she developed irreversible septic shock and died two days later. During the incubation period of 2-10 days, the patient only left her house twice, both times to attend a dentist for treatment.

Microbiological samples were taken from the taps at the patient’s home and from the taps and high-speed drill’s turbine and water line at the dental clinic. All the samples from the patient’s home were negative for Legionella but the dental cold-water tap showed 1.5 x 103Legionella colony forming units per litre (CFU/L), the dental unit water line 4 x 103 CFU/L and the high-speed turbine 6.2 x 104 CFU/L. It was concluded that despite no other patients becoming ill, this elderly patient contracted Legionella during dental treatment.

Looking for some of our devices to be installed?