Ozone as a disinfectant

“Ozone possesses several of the properties of an ideal disinfectant: it effectively removes pathogens over a range of physical and chemical conditions; it produces no residues and no unacceptable by-products (only oxygen); it is easy to generate, safe to handle, suitable for widespread use and cost-effective. Ozone requires only a short contact time to kill and inactivate bacteria, parasites, viruses and fungi and its antimicrobial action is relatively unaffected by pH. Unlike chlorination, it is able to give greater than 99% reductions in the levels of parasites such as Giardia lamblia and Cryptosoridium spp.”

Ozone (O3) is Mother Nature’s gift for safer, more effective sanitation. It is the only chemical-free & environment friendly disinfectant for all types of microorganisms.

When Ozone is released into the air it neutralizes all bacteria and viruses, leaving only oxygen. It leaves no harmful residues, by-products, tastes, or odors, and thus does not require a final rinse.

Ozone is the best infection control solution to removing bacteria, viruses and molds both on surfaces and in the air. Its bacterial disinfection mechanism works by oxidizing the bacteria cell wall and membrane, causing cell lysis and impairing cell functionality.

Ozone has many benefits as a disinfectant:

Ozone disinfection provides safe and healthy environment for a broad spectrum of businesses and institutions. Schools, gyms and fitness studios, residential aged care facilities, hospitals, restaurants, hotels, and many other businesses using ozone as a disinfectant can proudly say they are providing the safest environment for their clients.

All bacteria and viruses are composed of carbohydrate, protein, RNA and DNA. For structure of protozoa and bacteria, all cell organs are surrounded by cell wall and cell membrane. Ozone molecules in ozonated water have high oxidation potential and oxidize cell components of the bacterial cell envelope which is a consequence of cell wall penetration.
When ozone has entered the cell, it oxidizes all essential components (enzymes, proteins, DNA, RNA). This mechanism differs from that of halogens (such as chlorine), which are usually applied. Chlorine is known to penetrate cells by diffusion. Within the cell, chlorine affects several enzyme types.

Ozone’s bactericidal effects centers on disruption of envelope integrity through peroxidation of phospholipids and lipoproteins. There is evidence for interaction with proteins as well [1]. In one study [2] exploring the effect of ozone on E. coli, evidence was found for ozone’s penetration of the cell membrane, reacting with cytoplasmic substances and converting the closed circular plasmid DNA to open circular DNA, which would presumably lessen the efficiency of bacterial proliferation. It is notable that higher organisms have enzymatic mechanisms to restabilize disrupted DNA and RNA, which could provide a partial explanation for why, in clinical treatment with ozone at doses prescribed, ozone appears to be toxic to infecting organisms and not to the patient. [3]

Bacteria are microscopically small, single-cell creatures having a primitive structure. The bacteria body is sealed by a relatively solid-cell membrane.
Ozone interferes with the metabolism of bacterium-cells, most likely through inhibiting and blocking the operation of the enzymatic control system. A sufficient amount of ozone breaks through the cell membrane, and this leads to the destruction of the bacteria.

Viruses are small, independent particles, built of crystals and macromolecules. Unlike bacteria, they multiply only within the host cell. They transform protein of the host cell into proteins of their own.
Ozone destroys viruses by diffusing through the protein coat into the nucleic acid core, resulting in damage of the viral RNA. At higher concentrations, ozone destroys the capsid, or exterior protein shell by oxidation so DNA (deoxyribonucleic acid), or RNA (ribonucleic acid) structures of the microorganism are affected. 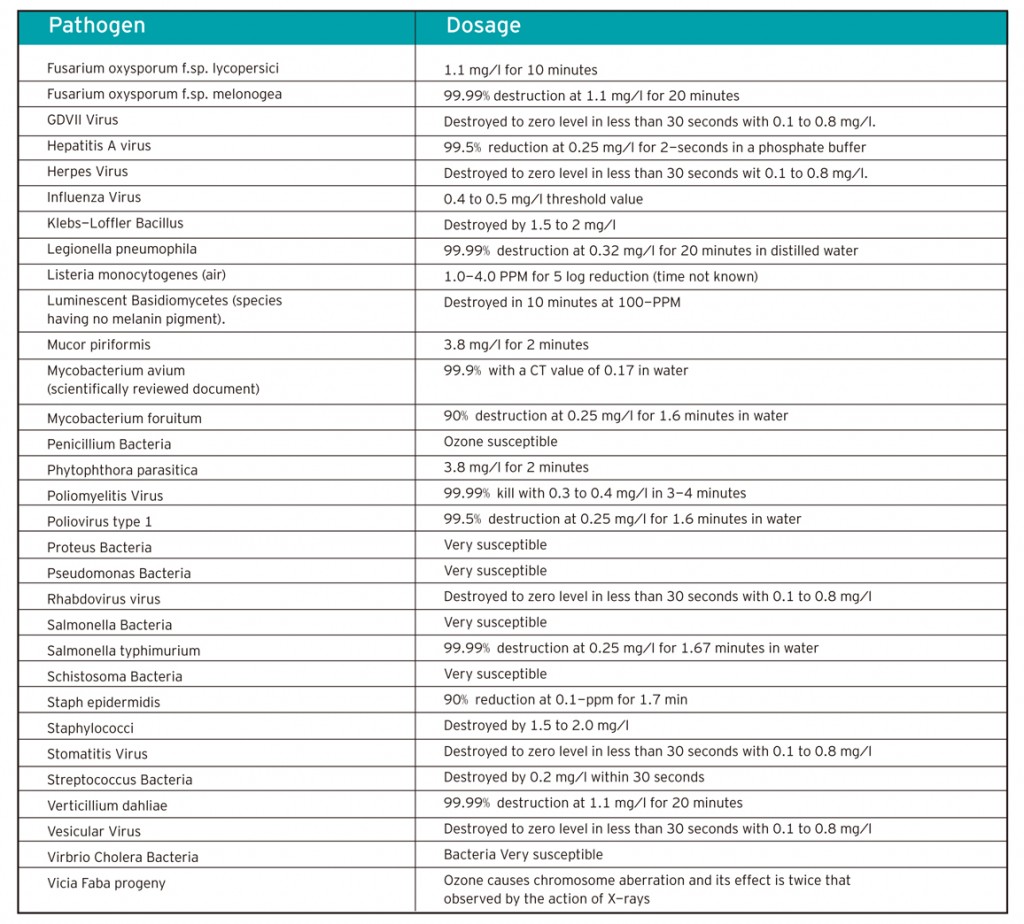 Ozone has 3,125 times stronger disinfecting power on bacteria and virus compared with chlorine and ozonated water has 50+ times stronger than chemical bactericidal agent such as chlorine bleach.

Ozonated water can kill 99.999% tested bacteria within 5 to 15 seconds as shown in SGS report. The required concentration is far less than chemical bactericide such as chlorine that requires 100+ ppm of chlorine for normal disinfection and up to 1,000 ppm for medical disinfection. Ozonated water can prevent bactericidal chemical residue problems and have advantage of cost saving on water for rinsing and prevent re-contaminated of disinfected materials by bacteria containing water.

O3 has many uses in dentistry and medicine. Around 100 000 dentists around the world have adopted Ozone for dental application.
It is helpful in treating Parkinson’s and Alzheimer’s disease, rheumatic arthritis, heart disease, etc.

RHP Ozone Therapy is the process where molecular oxygen (O2), through unique processes O3 (Ozone), is circulated in the bloodstream of a patient.

The therapy acts as a full blood and cell purification system. Each treatment session is 60 minutes (up to 120 min), and patients can carry on their daily activities after the treatment.

Looking for some of our devices to be installed?